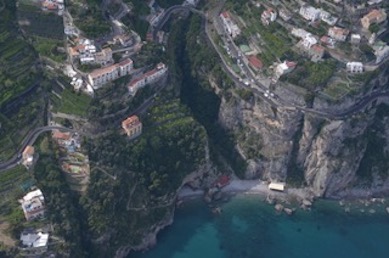 Bologna’s famous porticoes have been approved as the Italian candidate for 2020 to Unesco’s World Heritage List. The decision was taken by Unesco’s Italian Committee. Final decision is expected in 2021.

Bologna has 38 km of porticoes in the historic city center, 53 if you also consider the outer stretches. They are a landmark of the city, like the Two Towers and the local cuisine.
Not all 53 km of porticoes will be nominated; 12 of the most symbolic stretches have been selected.

To be included in Unesco’s World Heritage List, sites must present an ‘outstanding universal value’ and meet at least one out of ten selection criteria. The two criteria that will be used for Bologna’s porticoes are:

-number iv: “an outstanding example of a type of building, architectural or technological ensemble or landscape which illustrates (a) significant stage(s) in human history;”

-number ii: “exhibit an important interchange of human values, over a span of time or within a cultural area of the world, on developments in architecture or technology, monumental arts, town-planning or landscape design.”

In the Unesco application, the porticoes are described as “an identifying element of the city of Bologna, both by the local community and by visitors, and a benchmark for a sustainable urban lifestyle, where religious and civil spaces and the homes of all social classes are perfectly integrated.”

The porticoes are nominated because, they constitute “the excellent result of a system of urban planning outlined over the course of nine centuries, as well as an architectural and social model, a place of integration and exchange in which the main protagonists of the city, citizens, visitors, students, live and share ideas and time.”

“The nomination of Bologna’s porticoes to Unesco’s World Heritage list is great news for Bologna and for Italy,” Italy’s Culture Minister Dario Franceschini tweeted. “The porticoes are extraordinary and unique and their beauty will conquer the world.”

How do you recognize a Bolognese on a rainy day? He/she will stride confidently down the streets of Bologna without an umbrella, knowing they won’t get wet: there are 53 km of porticoes to shelter them. (38 km are within the 13th century walls, what corresponds to the historic city center).

Porticoes were born out of space and social needs. As Bologna began rapidly growing in the High Middle Ages (starting in the 11th century), as an independent ‘Comune’ and as the seat of an increasingly important University that attracted students and professors from all over Europe, it needed new residential and commercial spaces. From the first floor up, residents started to create additional space in their houses by extending the buildings outward; the ledge that was created was supported by wooden beams resting on blocks of stone or selenite (glassy gypsum found in abundance in the Bologna area).

By law, the city of Bologna established that the underlying loggia was to be used as a public space, even though it was built by private citizens on private soil.

It’s this rule that has made the development of porticoes in Bologna different from all other major European cities. Construction of porticoes was standard in the Middle Ages (just as it was in antiquity), but they were mostly for private use. Recognizing the public benefit of having porticoes, when other cities prohibited the construction of further porticoes in order to regulate community space, Bologna instead ordered that porticoes be built on all streets where they would be useful and that their use be public; this law dates from 1288 and is still in force. Building houses without porticoes would become the exception in Bologna.

What Made the Porticoes of Bologna Special.

The keyword here is useful: Bologna’s porticoes expanded and became a fixture of the city because they were considered functional. Citizens appreciated the opportunity to walk sheltered from bad weather, while artisans valued the possibility to easily display their merchandise and to work outside rather than in the dark. Students without accommodation for the night found shelter under them.

Realize how forward-thinking Bologna was, compared to other European cities of the time; after all, Bologna, with its university, led the way in the teaching of laws that governed civic life. (Incidentally, Bologna was the first to abolish slavery, in 1256; other cities followed much later.)

The 1288 statute also established that all porticoes should be at least 7 feet high (about 2.70 m) in order to allow the passage of a man riding his horse.

Later, in 1363, a law ruled that wooden porticoes could no longer be built as they were more prone to fire; in 1568, a decree ordered that wooden pillars should be replaced by brick or stone pillars. Not everyone complied, especially in the poorest areas of the city, and some wooden porticoes dating from the 13th century still survive today.

Parma Capital of Culture for 2020

Here are five great reasons why Parma deserved this title

Food as heaven
Parma ham and Parmesan cheese have made the city a household name all over the world. Around Parma you'll find some of Italy's finest artisans making some of its tastiest prosciutto, salami, cheese and porcini mushrooms. It's home to the top school of Italian cooking, Alma, and the only place in Italy to earn Unesco's "creative city" badge for its gastronomy.

It has opera in its soul
Parma province houses two of Italy's most famous musicians, composer Giuseppe Verdi and conductor Arturo Toscanini. You will find their legacy not only at their birthplaces (now museums) but in the concert hall, philharmonic orchestra and annual opera festival named after them.

There's art everywhere
Not only in the Galleria Nazionale, where you find work by artists like Parmigianino and Carreggio alongside with Leonardo da Vinci and Canaletto, also in its several private galleries and in the city's churches, where spectacular frescos illuminate the walls.

Its architecture doesn't stand still
Parma is rich of Medieval, Renaissance and Baroque architecture - the cathedral, all wood Teatro Farnese, octagonal baptistery and Palazzo della Pilotta. Recently Parma has added contemporary designs to its architecture, including the Barilla Center and Auditorium Paganini converted from an old sugar factory by the architect Renzo Piano.

Its museums innovate
Parma's museums are anything but stuffy, as well as historical artefacts and art collections.You may find entire displays dedicated to food. Just outside Parma is the Labirinto della Masone, the world largest maze, built by editor Franco M. Ricci as a promise to write Jorge Luis Borges.

To really embrace the spirit of Christmas visit Verona in north of Italy, to experience the international Nativity Scenes Exhibition.

Since 1983 this festival has enchanted millions of visitors, this year it runs from November 16th 2019 to January 19th2020. Usually, it takes place at the Verona Arena, a Roman amphitheatre. built in the 1st century, that became the theatre for dramatic performances in Renaissance times.  For this year the exhibition will be hosted inside Gran Guardia Palace, in front of the Arena.

Over 400 different works from around the world inspired by the theme of the Nativity. The scenes are also international, having been created by the Veronese community or provided by European artists and museums. It's a truly international exhibition with participants hailing from countries such as France, Spain, Portugal, Germany, Austria, Korea, Japan, China and many African and Latin American nations.

Verona has many sights and activities in addition to the exhibition. Romantics of all ages can enjoy visiting the balcony of Romeo and Juliet in Via Cappello. To ensure a happy life together, lovers can toss a coin into the Wishing Well, Vicolo San Marco in Foro.

Verona is also a historic and cultural wonderland. Monuments such as the Piazza delle Erbe, the Lamberti Tower, the Duomo and Castelvecchio stand testimony to the city's eventful past.

What to visit in MILAN for the 500th anniversary of Leonardo da Vinci ?

Thousands of tourists will be flocking to Milan to see his world-famous mural of the Last Supper. However, Milan has one of the best hidden treasures, La Vigna di Leonardo (or Leonardo da Vinci's Vineyard).

Located just across the road from the S. Maria delle Grazie (where the Last Supper is) one can find Leonardo's vineyard. This was the place where Leonardo relaxed after hours of painting his beloved fresco.

The vineyard was given to Leonardo by his patron, the Duke of Milan Ludovico Sforza, in 1498. As many of you may already know, Da Vinci, came from a family of winemakers, so owning and running a vineyard was no challenge for him. But, there was another reason for the artist to own the piece of land,   and it was to gain Milan's citizenship.

With the invasion of the French in 1499, Leonardo fled Milan. However, the vineyard still remained very dear to him, and Leonardo remembered to leave it to two of his favorite servants in his will.

In the 1920s, researchers tried to restore the broken-down vineyard, but later had to drop their initial plans with the beginning of world war two.

La Vigna di Leonardo suffered under Allied bombings in the 1940s, but still managed to stay mostly intact. Including the Last Supper, which had been protected by sandbags and survived.

Today, the vineyard has been completely restored to look as similar as possible to Leonardo's descriptions. Scientists have also recreated the vines that Leonardo had grown during the Renaissance. While these grapes have finally bloomed, they are not meant to be consumed for another few years.

However, there are still plenty of things to do (and to drink) in La Vigna di Leonardo. There are tours around the vineyard for €10 per person (€8 for over-65s and under-18s; free for disabled and their carers). This will give you a chance to travel back in time and feast your eyes on the beautiful landscapes that Leonardo once roamed. Those visiting on Saturdays can also enjoy a Milanese aperitivo, with an additional charge of €5. The aperitivo will include "homemade" wine (not from the Renaissance) and various different appetizers for guests to nibble.

To learn more about Leonardo da Vinci's vineyard, please  contact us with your questions... 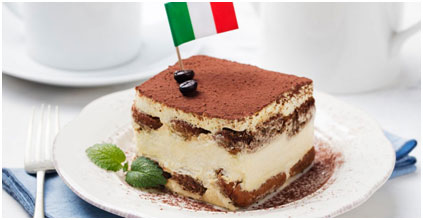 Most believe that the origin of tiramisú dates back to the 1960 in the region of Veneto, north east of Italy.

Its name says it all. It means "pick me up", Tiramisú is a sugary, caffee based creamy cake, found on Italian menus all around the world.

It's made from layers of ladyfingers (soft sugar cookies) dipped in espresso coffee and heaped with mascarpone cheese whipped with eggs and sugar. Many modern versions use sponge cake instead and some add coffee liqueur to give an extra kick.

You may find different flavors, such as strawberry and pistachio.

It's such a popular treat in Italy.