How to pronounce "C" in Italian

When did Italian become the language of Italy? 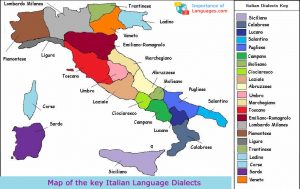 Map of Italian Language and Dialects

The Italian language derives mainly from "vulgar" Latin, which was the spoken language among commoners and less educated citizens of ancient Rome. The other form, classical Latin, was used in a literary and ecclesiastical scope. Many words correctly used today in written and spoken Italian (for example: gloria, causa, poeta, memoria, medicina, simile) are taken directly from the Latin language of 2,000 years ago.

The use of Latin is diffused as a result of the conquering done by the ancient Romans and from the extension of their empire. As a spoken language, Latin probably rose during the 8th century B.C. and was spoken until the year 800 A.D. - the period when the Romance languages emerged, consisting of Portuguese, Spanish, French and Romanian, in addition to Italian

For many centuries, however, Italian remained an exclusive conduit for literary expression, used only by educated people. The various dialects continued to be spoken, favored even during the political fragmentation of the Italian peninsula, which remained divided in numerous city-states until 1861 - the year of the unification of Italy.

Before the unification, a survey revealed that 78% of the population was illiterate. The majority of the people communicated in their respective dialects, while only 3% of Italians spoke standard Italian.

After the fall of the Roman Empire, the initial development of the Italian language took the form of multiple regional dialects. These dialects for many centuries had maintained their separate identity, since there had been few and limited movements of the population within the Italian peninsula. The Florentine dialect was the one that earned the most exposure in Italy through writers such as Dante, Petrarca and Boccaccio, whose literary works gave prestige and prominence to the language.

For many centuries, however, Italian remained an exclusive conduit for literary expression, used only by educated people. The various dialects continued to be spoken, favored even during the political fragmentation of the Italian peninsula, which remained divided in numerous city-states until 1861 - the year of the unification of Italy.

Before the unification, a survey revealed that 78% of the population was illiterate. The majority of the people communicated in their respective dialects, while only 3% of Italians spoke standard Italian.

During the 1920s and 30s, the Mussolini government started a very aggressive campaign of “Italianizing” the Italian people. In fact, Mussolini and the fascists, were convinced that Italians took greater pride in belonging to their regions of origin than in being Italians, and lacked a sense of “Nationality” and of national pride. The use of local languages (which were referred to in a derogatory way as “dialects”) was banned in offices, schools and all State institutions. Regional army battalions were dispersed and a true national army was implemented for the first time, with a compulsory military service during which young men could be sent to the opposite part of the Nation. The radio broadcasted only in Italian and a standard way of speaking Italian was formed.

Today, Italy has reached linguistic unity and the overwhelming majority of its 56 million inhabitants speak Italian. However, dialects still remain alive and in some regions they are spoken at home, especially by older generations. Even those that speak the Italian language use a different accent, depending on their geographic origin. In fact, when Italians speak amongst themselves, in general they are able to understand which part of the country the other person comes from, according to the accent they use.

Italians in the north, center, and south have a different pronunciation, and in addition, the vocabulary used could change from one region to another. These differences are attributed to the numerous invasions and occupations of the various regions by different foreign governments. However, in modern society, these regional variations normally don't represent more than a communication barrier among Italians. Today, the Italian language is spoken by more than 90% of the population that lives in Italy, and is among one of the most studied foreign languages in the world.

It is Officially, March 25th is National Dante Day 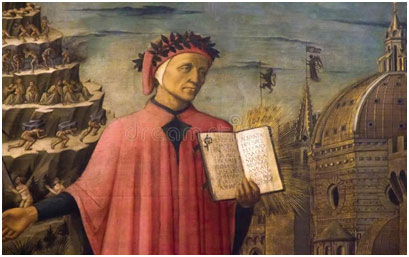 The Italian government has decreed March 25, National Dante Day in honor of the celebrated author of the "Divine Comedy" a symbol of unity.

The Italian cabinet has approved the proposal of the Culture Minister to make March 25th National Dante Day or "Dantedì" as we approach 2021, which will mark the 700 year anniversary the dead of poet Dante Alighieri

The date of March 25th has been identified by scholars as the beginning of the journey into the afterlife narrated in The Divine Comedy.

According to the Culture Minister,  Dantedì will be "a day to remember in all of Italy and the world Dante's genius with numerous initiatives involving schools, students, and cultural institutions."

As the father of the Italian Language, Dante Alighieri has come to represent an important symbol for Italy as a unified country, one that is particularly important in the era of Brexit and the various waves pf separations movements spreading across Europe. 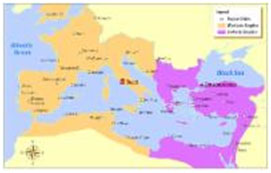 After being abandoned on the river Tiber, twins Romulus and Remus were saved and suckled by a wolf. As adults they decided to found a new city but disagreed on its location. Romulus settled the argument by killing his brother and naming the new city after himself. The story of how Rome got its name is as famous as it is fabled, but how did the city end up with the nickname Eternal City?

The relentless power of Ancient Rome led to many of its citizens believing that the city would go on forever. After extending the empire to the remote sections of Europe and Africa and defeating the formidable enemies like the Carthaginians and Etruscans, it's not hard to see why this belief was so commonly held. Roman writers and poets were no strangers to boasting about their city's glorious accomplishments and illustrious history. In The Aeneid, the poet Virgil wrote the line imperium sine fine - an empire without end. Written between 29 and 19BC, it refers to the everlasting empire that Aeneas, was prophesied to have a hand in creating (ancient Romans claimed Aeneas was an ancestor of Romulus).

However,  it was the poet Tibullus who made the first explicit reference of Rome as the Eternal City in the 1st century BC. "Romulus aeternae nondum formaverat urbis moenia, consorti non habitanda Remo" - Tibullus, from Elegies. Meaning, "not yet had Romulus drawn up the Eternal City's walls, where Remus as co-ruler was fated not to live". By coining the phrase Urbs Aeterna, or Eternal City (which later become Roma Aeterna), Tibullus was responsible for starting the trend among Romans of thinking of their city as the pinnacle of society; if Rome fell so would the rest of the world. Tibullus' famous phrase gained traction during the reign of Augustus as Virgil and Ovid, considered two of the greatest Latin poets, picked it up and used it in their own work. Livy, a Roman historian and author of a monumental 142-volume chronicle of Rome, also adopted the phrase. Urbs Aeterna became so widely used it even made it into a number of official documents of the Roman Empire.

Film, literature and popular culture continuing to refer to Rome as the Eternal City, and for this reason the nickname doesn't appear to show any signs of fading out. 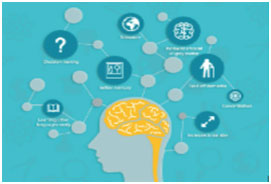 It's hard to believe that in the past, multilingualism was seen almost as a handicap as people believed that learning a foreign language confused and had detrimental effects on the brain rather than benefitting it.

However, most people nowadays agree that this couldn't be much further from the truth.

Studies have shown that learning a language is one of the most effective brain workouts that you can do. According to a study carried out in Sweden, mastering a foreign language causes areas of the brain associated with memory, to increase in size.

Studies have shown that there is no age limit when it comes to reaping the benefits of learning a foreign language.

It is hard to imagine (especially as a language learner) hearing a word just once and being able to store and recall it perfectly.

The brain will respond positively to the stimulation of language learning no matter what age it is. The words may not stay with us as easily, but rest assured that simply the act and exercise of memorizing them is doing you good.

Here are some benefits that you can expect to reap from multilingualism.

Improves employability: In a world that is becoming more globalized every year, it is important that you have international skills. People are moving between countries more than ever and languages are an essential skill to have if you're hoping to start a life in a new country.

Easier to learn other languages: This may be an example of a brain benefit, but learning a language is about so much more than cognitive ability. The number one trait you need is confidence. If you can't get over the initial embarrassment barrier then you will never practice, never be corrected and you will never improve. Learning one language gives you the essential confidence to go on and learn another, knowing that it's possible.

More tolerant: People who speak more than one language typically have a more tolerant view of the world and the variety it offers. Multilinguals are more open-minded and accepting of change and other cultures.